Also known locally as "Xibalba", is an extraordinary cave in Belize, near San Ignacio, Cayo District, notable as a Maya archaeological site that includes skeletons, ceramics, and stoneware. They include the famous "Monkey Pot", one of only four located across Central America. There are several areas of skeletal remains in the main chamber. The best-known is "The Crystal Maiden", the skeleton of a teenage girl, probably a sacrifice victim, whose bones have been calcified to a sparkling, crystallized appearance.

The ceramics at the site are significant partly because they are marked with "kill holes", which indicates they were used for ceremonial purposes. Many of the Mayan artifacts and remains are completely calcified to the cave floor. The Mayans also modified cave formations here, in some instances to create altars for the offerings, in others to create silhouettes of faces and animals, or to project a shadow image into the cave. The cave is extensively decorated with cave formations in the upper passages.

The Belize Tourism Board has granted licenses to a small group of agents to conduct tours to this cave, in an attempt to protect this fragile cave system.

The cave is located in the Tapir Mountain Nature Reserve. The main cave system is about 3 miles long and consists of a long river passage for approximately two miles, which ends at an upstream sump. A series of upper prehistoric passages continues another mile past the sump through massive breakdown boulders and giant rooms. The cave can be exited through a tight squeeze ending in a giant sink hole collapse in the jungle. The cave's upper passage called "The Cathedral" is located about 1/3 of the way in from the lower entrance. Here 14 skeletal remains have been found, and numerous examples of ancient Maya pottery remain. 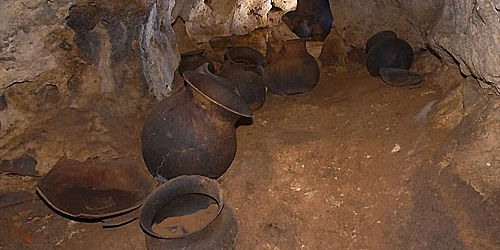 Level of Difficulty: Challenging - A good level of physical fitness required. Ability to swim is a plus

Remember to bring along: Clothing: Shorts and T-shirts are suggested along with a good pair of tennis or hiking shoes (no sandals allowed). You will be getting wet so bring along extra clothing; pair of socks